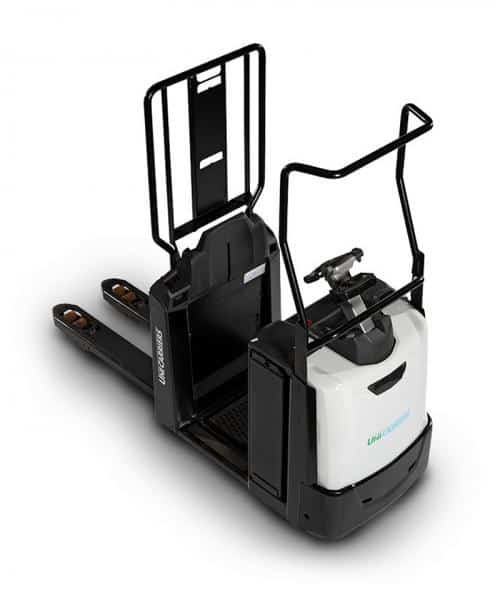 • Unicarriers launched four order pricker models – the OLP, OEP, OLH and OEH – with and without lifting platforms and Ergolift in the Summer of 2019.
• The trucks use “Instant Launch” technology that allows the driver to accelerate immediately when boarding without having to operate the presence switch. The order picker reacts without delays and response times are significantly reduced compared to conventional order picking trucks.
• The order picker also includes “Boost Effect” technology to help it reach top speed quickly.
• The operator floor area has a step height of only 123 mm, which is below the industry average.

• This ergonomic design is found elsewhere on the truck, as with the other models in the O-Range.
• A low-step in height and the 3D Step-In design helps increase efficiency and reduces the strain that can occur during intense order picking.
• The XControl steering wheel also puts the truck’s vital controls at the operator’s fingertips and is designed to give the driver better visibility when reversing, while also reducing strain.

• The XControl steering wheel on the O-Range offers the driver increased freedom and range of movement during operation.
• The accelerator and fork/platform controls are easily reached on the wheel, and are mirrored on both sides, making operation just as easy with either hand.
• The wheel can also be grasped and the accelerator operated from the top, allowing the driver a much better position to look behind the truck while reversing, without needing to strain the neck. The accelerator can also be operated via walk beside buttons at the rear of the truck, allowing the operator to move the truck without getting on it while picking

• The rounded edges also minimise the risk of damaged goods, while the low bumper on the short chassis prevents foot injuries.
• For even better space utilisation, there’s the option of Tiller-Up drive.

We’d love to hear from you…